SAP add-ons and SAP enhancements for production and logistics.

IGH Infotec AG is your specialist partner for SAP add-ons (SAP enhancements) in production and logistics.

Since its establishment more than 25 years ago, IGH Infotec has developed from a supplier of specialist solutions for the logistics industry to a market leader in the field of “Mobile data capture with SAP” and “MES (Manufacturing Execution System) directly in SAP”. Worldwide, national and international companies in widely varying industries work with our products. The systems are of modular design, quickly installed and can be adjusted flexibly to suit the respective task.

From logistics to production to quality assurance – our systems show you what is not working.

From the operator and the machine to input materials and tools right through to the finished product, or from goods receipt via the warehouse and order picking to goods issue – IGH Infotec AG is your expert partner for your production system and material flow.

We not only supply systems, but also support you with advice on using these tools. In this way, you benefit from the expertise we have gained during many successful projects. This saves you time and resources – bringing a rapidly measurable increase in efficiency.

The basis for our success is our employees, who move your company forward day by day in a very practice-oriented manner.

IGH Infotec – who are we?

Practical process know-how combined with SAP expertise in production and logistics – for more than 25 years!

IGH Infotec AG was established in 1995 and, since its foundation, has focused on the topic of “Mobile data capture”. After initially programming purely customer-specific data capture systems, we quickly realised that sustainable growth is only possible with standardised software.

This coincided with the fact that many of our customers were migrating from existing individual ERP systems to the SAP R/3 standard.

SAP R/3 gave us the opportunity to standardise the software technically and functionally. To do this, we first used a self-developed middleware, which communicated with the SAP system via an interface. From R/3 Release 4.7 on, we have used Web-AS, which was new at the time. The problematical subject “interface” was thus removed from the frame.

This was the starting point for our SAP add-ons (SAP enhancements) for production and logistics – integrated in SAP – without an interface.

Mobile data capture in logistics became a “bestseller” for us. Our portfolio grew from just a handful of processes to more than 150 sophisticated mobile workflows for production and logistics.

In the year 2005, we became an SAP partner with the corresponding certifications. It was at this point that we also developed our first “MES applications”. The first systems were strongly oriented towards the workflow architecture of mobile data capture. 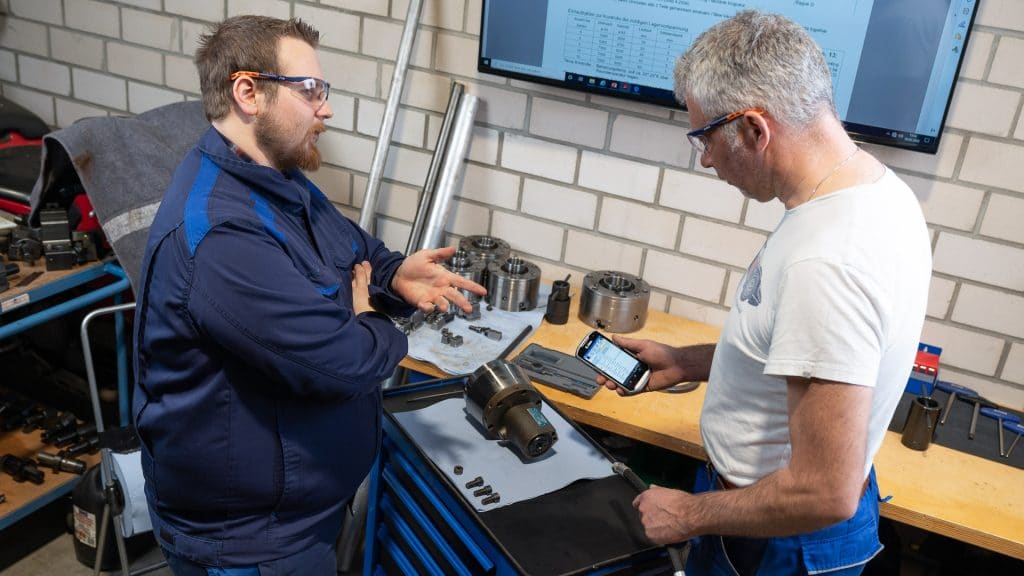 We quickly established the topic of “MES with SAP” as an independent product. Here, too, we initially focused on standardisation. Over the years, we developed a comprehensive MES system as an add-on in SAP, completely without interfaces and separate data storage.

Today, our MES comprises a comprehensive portfolio of modules, from integrated machine communication to order and resource management and analytical evaluation of the data in order to display individual Key Performance Indicators (KPIs) (OEE, TEEP, etc.).